A few years back, I decided to get a digital camera to try my hand in photography. I got an entry level point and shoot, a Canon Ixus 30. As time went by, I realized that most of my shots didn’t really come out the way I wanted them as I found myself limited by the camera’s lack of manual controls and watered down features. I eventually sold it to my sister for a steal of a price.

Then when my buddy Rob went to London and came back with a nifty Fujifilm Finepix S5600, I found myself wanting to get one but always putting it off for something more that I wanted at that time – PC upgrades and other things – but deep inside, how I really wanted to get the Finepix and start shooting photos with a more appropriate hardware.

Then, just last week, Rob decided that he’d go for an SLR in the Nikon D80. He offered me his Finepix for a really manageable price – and this time, I didn’t back down. Initially, I told him to hold on to it for me until March, as I didn’t have the means to pay for it. But I guess Him up there really wanted me to have it as a client paid up the money exactly needed to pay for the camera. A week later, I was taking the camera home with me, and just earlier today, I did some shots to test if I still have the knack for taking photos.

All I have to say is this – I love this camera – it’s quite bulky but I’m not after mobility comforts – I want to take respectable photos and with its auto setting, it takes fine photos that one would end up rarely going full manual. However, if you intend on learning enough to go SLR, the Finepix S5600 is a great springboard prior to moving to SLRs.

Here’s some photos I took this morning:

A pair of white gumamelas from Mom’s garden.

A bunch of red santans in Mom’s garden. 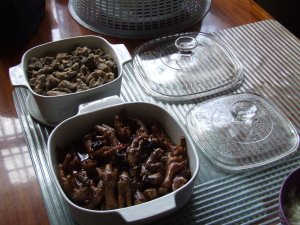 A faux dragonfly in our neighbor’s garden. 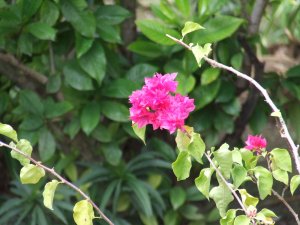 A bunch of bougainvilleas in Mom’s garden.
Obviously, I’ve fallen for shooting subjects with a setting focusing on the depth-of-field. It’s been something I wasn’t able to do with compact point and shoots, so I’m relishing the Finepix’s ability to take them with relative ease and superb detail.

One thought on “PHOTOS”